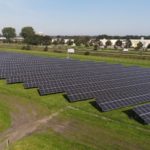 UK renewable power developer Anesco has been awarded an EPC contract by Shell New Energies to assemble a 30MW photo voltaic farm in Sas Van Gent-Zuid within the Netherlands.

The photo voltaic farm, which is being constructed on a former industrial web site for sugar manufacturing facility waste disposal, near the border with Belgium, will cowl an space of 24.7 hectares and include over 55,000 modules.

The design stage is already properly underway and web site work is predicted to begin in the direction of the tip of March 2021.

Once energised, the photo voltaic farm shall be taken care of by Anesco’s specialist operations and upkeep staff, who will guarantee it continues to function at its optimum effectivity.

Anesco can even play an integral position within the continued programme of Shell New Energy and companion organisations, to mix experience to optimise operational practices for the advantage of biodiversity and photo voltaic.

Daniel Cohen, Anesco EPC director, commented: “We’re delighted to be partnering with Shell New Energies as soon as once more and to be constructing on our rising relationship, to generate much more renewable power for the Dutch energy grid.

“Since finishing our first initiatives exterior of the UK final yr – overcoming the various challenges introduced by the pandemic to take action – our worldwide pipeline has grown steadily, and we look ahead to a busy 2021.”

This challenge follows the profitable completion of two earlier photo voltaic farms in 2020; a 12MW facility in Emmen and a 14MW set up close to to the city of Heerenveen in Friesland.

As with the development of the earlier two photo voltaic farms, Anesco’s staff shall be working intently alongside native suppliers and Shell, to ship the challenge.

Established in Reading in 2010, Anesco has developed in extra of 100 photo voltaic farms and its renewables operation and upkeep arm now has greater than 1GW of renewable power beneath administration.